In October every year I head to Denver to help my brother out, babysitting his aged pets while they have an anniversary trip to Mexico.  (Due to a simple but tragic mis-reading of my schedule, I was ORIGINALLY assigned this month for my AIR, so I wondered if there were any gaps in the schedule that I might come back and do a little token residing) This year it snowed his first day out and I forgot about what I will return to ...Phoenix HEAT!
The trip down was via Wolf Creek Pass in Colorado and last time I went up that route a couple of years ago I was crying on the way down.  The beetle kill was so awful.  This time I left early in the long shadows of morning, to the west, so the sun did not blind me and NO TRUCKS stressed me out!  I really enjoyed it!  Then back through the mountains and on to the familiar flat Rez land on the way back to Arizona.
Kip did arrange a three night recovery for me, from the 12 hour trip.  I feel it a lot more coming home than driving up. Probably the depression of coming back to boring old home....
In to the Park, I was eyeball burned and aware that it was no longer Spring.  The deep autumn in the park brings rusts and gold to the rolling flat grasslands.  And the air was softer, whiter.  I found there was a lot of "controlled" burning going on in the area.  It was seriously changing the nature of the place.
Once I located my key and was settled in to cabin 77, the L-shaped one, I met my neighbors, a water colorist and her husband from Tubac.  They had arrived the night before and I gave them my brief park rundown. They also made me feel guilty that I was not up to the task of this place.... Relived that an artist was in the park to contribute to the experience, but again, not sure where I fit..
I had been turned down for another residency (and I should have held off for next year, as I an already hoarding the days I can talk someone in to giving me precious hours here) but I had thought I might work on a sample of my project if I can apply it to another park... I have my eyes set on Mesa Verde as I had a short email chat with someone there and they MAY allow the cat!
I wanted to do what I do best - humans.  The project, which really was an offshoot of the ill-fated model release I never ended up using, was to meet and immortalize at least one visitor a day, probably from another country, with a brief interview and a lot of photos.  To show how really valuable the park is to US.  The humans who revitalize ourselves, who often only get to experience actual nature in these parks.
Now with the impending doubling of fees, I think it is even more necessary to show that access by EVERYONE is necessary!  We own these places and we need them to STAY human.

I packed for Denver and found myself lacking some necessities for the Park.  I have all (oh, I am nearing another good 500 if not more photos from the Denver Zoo and Rocky Mountain Arsenal wildlife snapshots) my photos in the camera, but forgot to bring the card reader for to put them into the computer to use when I am connected by wifi in the few areas of the park that I can connect!
I did learn that my phone can transfer a few photos, so we are lacking the beautiful shots and back to being a tourist!!!
Here is the Thing, settling in at his home away from home: 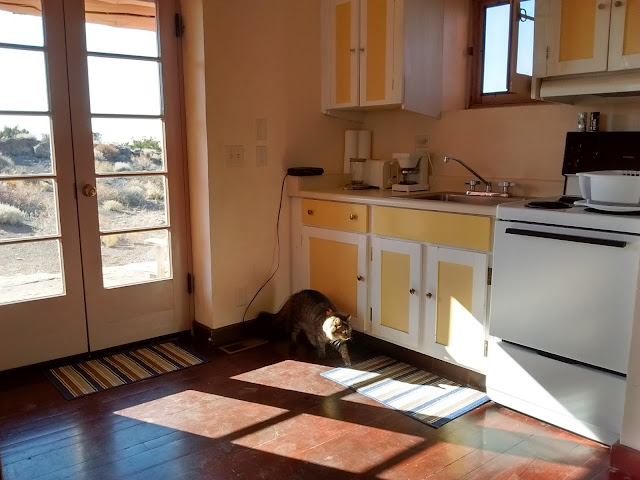 I left for about an hour and came home to tail-less corpse of a three inch lizard that he had already murdered.
I understand there is a small chewing creature next door, and as this is our third stay, I am grateful that my traveling companion has earned his keep... of course the lizards are NOT an issue, but he is always on patrol!

Posted by Debra Jones at 7:57 AM No comments: