Cleaning up the Casita is the big chore of living there. Strange beasties and such think there is NO REASON for us to be there, and perhaps they are right.  The cat and I have successfully repelled things on all our trips.  Perhaps his chasing across the floor as I TRY to sleep and talking to himself is what scares them off.

I pass on some wisdom to the next tenant in the book by the bed they call the Guest Log: 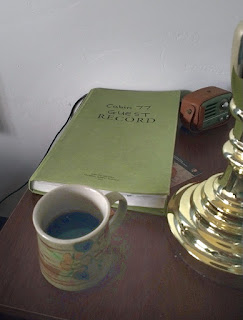 I really committed to the nothing of the experience.  I dawdled cleaning and made my third rearrangement of the furniture something I just feel compelled to do.  The cat in my car is smooth as clockwork these days.  Bigger car, and older cat.  He slept all the way up and was only mildly interested in a little walk on the leash before we left.  He is borderline boring.
I spent time in the visitor center in the Puerco Ruins.  There is a semi-stupendous slideshow (a good 15 min) that has all the archaeological discoveries.  I was mesmerized.  Normally there is so much to do.  I never actually DO anything. 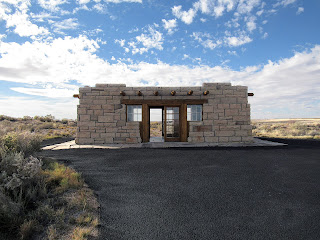 On the way out, I made another pilgrimage to Newspaper Rock... not for the petroglyphs but for the omnipresent ravens.  They literally were feet away this time, hanging around, grabbing bugs off our grills.
Posted by Debra Jones at 2:03 PM No comments:

I was up plenty early due to the cat deciding to drag race through the house. I am hoping that means he's chasing vermin! It still doesn't mean he hasn't found every single thing to knock off every single table but so far only one really scary centipede.

I made my coffee packed for chili weather, which means I overdressed and lo and behold they're in the Painted Desert Visitor Center  parking lot was a gigantic truck filled with Christmas tree. 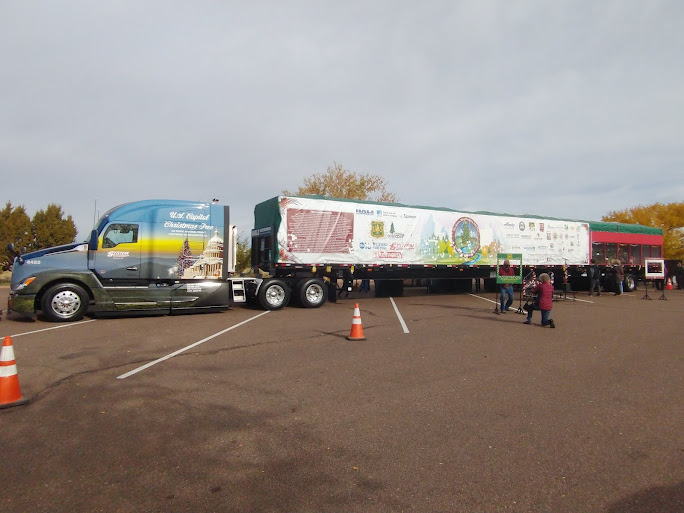 I arrived plenty early as the festivities weren't scheduled until 9:00 but luckily I got there just as the organizers said they wanted the ornament that was given to the truck driver (mine) last night to hang on the tree... that red space there at the very very back has clear windows and you can see a lot of the ornaments that have been given as special treats. I do believe the bulk of the ornaments beat the trailer to Washington DC. Because I goofed and left my phone in the car all I had was my camera which I can't upload from when I'm on the road but I did get a picture of me handing it to the representative.

Aside from the free hot chocolate (which I vigorously enjoyed, having just escaped the hundreds and now into the high 90°s in Phoenix) there was a presentation which included an honor guard. And a nice little walk-through display from six Rivers National Forest including this gigantic slab from the bottom of the tree in the Box showing how old it was. Apparently it's one year older than I am.
I had plans to come and get fry bread on my way back in the evening but that was before I realized that I had slightly low tire pressure. From 100° to 39°. I believe that would account for it but it might be a better idea to check in Holbrook on my way out.

I spent the rest of the day doing the sort of things you would hope to do on a single solitary day in a single solitary place. I made myself drive out to the teepees and sit. Half an hour to 45 minutes in one spot just watching the clouds play on the badlands. And then I walked up to Puerto Pueblo and actually spent some time looking at it. I had already gotten some petroglyph pictures on a previous joint but this time I was more careful I didn't devour them hungrily I took photographs put down my camera and then watch them with my own eyes. As usual Ravens were doing their thing everywhere! And I think when Ravens show the rest of the animals are a little bit more shy.

I will tell you right now that one of the good things about this trip was I specifically tried to not take as many photographs I tried my best to experience so y'all are out the massive quantity of photo references I usually have, but I will say there are a few that are the memory evokers ...basically, casita experiences. Cats in the windows and sunsets.... 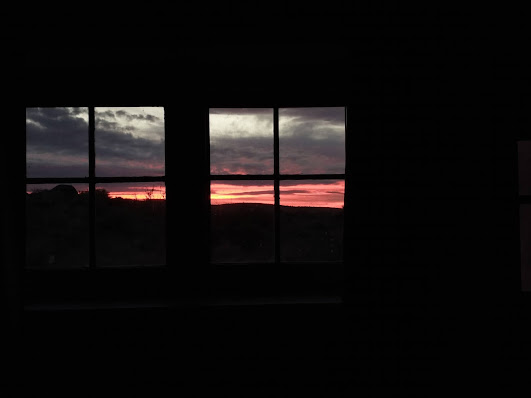 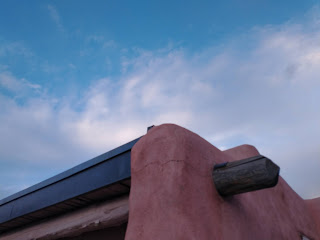 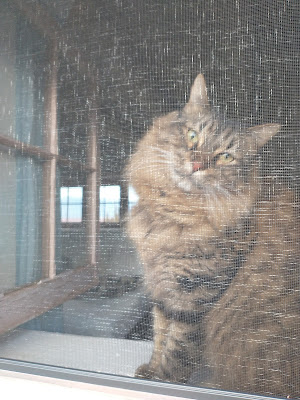 Of course it's early on Wednesday and I'm going to have to clean up the Casita and pack stop in Holbrook and check my tires drop off my keys and mystery items provided to me so I could be identified as one of us in the park. A raven just flew past my window and I did not check for spelling errors... But so I can begin my day I'm going to just publish it and edit it when I get home I hope you all enjoyed this little adventure of mine. I do so love the Petrified Forest. 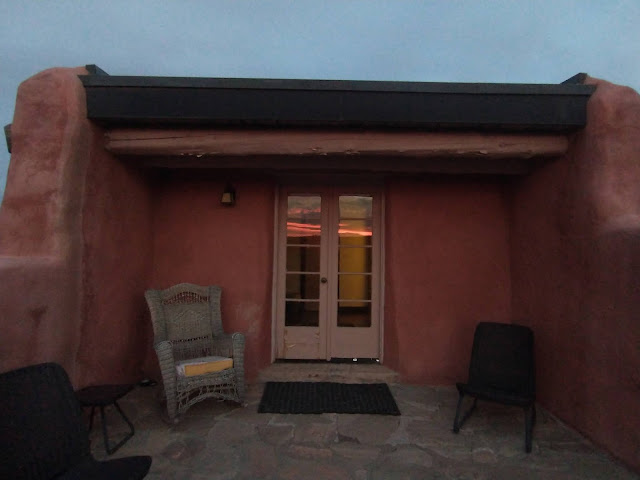 ...A Post Script:  I just found if you still have Facebook...
The US Capitol Christmas Tree Page
Posted by Debra Jones at 5:49 AM No comments:

To See The Tree

I negotiated myself a two-night stay in the l-shaped Casita in order to watch the US Capitol Christmas tree come through, which they asked me to design the ornament for: 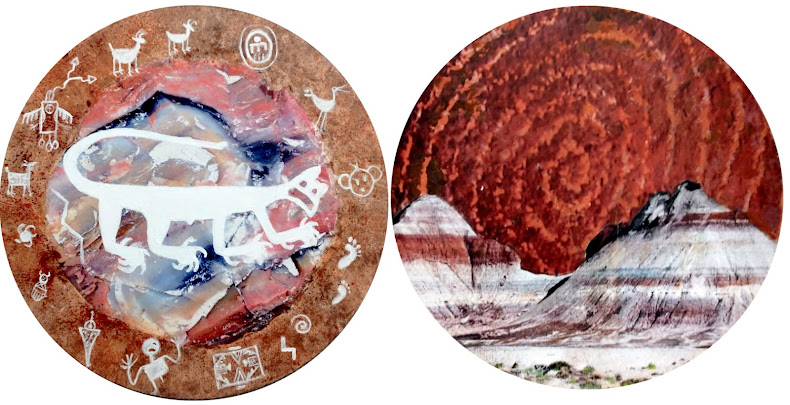 The parks requirements were that it be no larger than 12 in and waterproof. The theme was "Seven Rivers (the forest from whence the tree came), Many People, One tree." So I decided that the rivers of stone or sand or bentonite that make up the teepees where the many colorful Rivers, the petroglyphs of the people that live here were the many People, and the centerpiece with our cougar petroglyph logo is One (petrified) Tree!
That's my story and I'm sticking to it.
As usual my colleague and I made the trip very safely and arrived around 11:00. I know I'm a very weird girl and I have strange things that make me happy but staying here is one. And getting a magnet that I can wear around and look like I'm part of the park is the other. 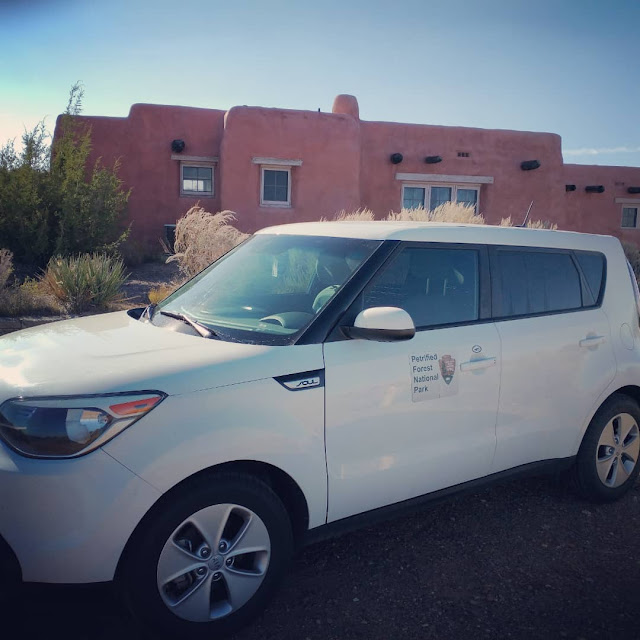 I had a very sad revelation. I am old. 4 years ago when I lived here I was in better shape had not sat on my butt during a 2-year pandemic and even then I was not the world's greatest hiker. After a 3-hour car trip with no stops, (I had a really great audiobook that let me drive straight through. I finally figured out how to download from my library so I listen to Desert Solitaire about a guy staying in arches National monument be moaning his knowledge that it would soon be developed in the 1960s 😥) when I picked up the ornament to do some touch-up I realized my hand was somewhat shaky, my knees were not working properly and my back hurt. Sleeping on memory foam is not good for me. I have a big butt. I admit it right now I need something that supports the arch in my back and memory foam, as the commercial says remembers things and seems grumpier than it should!

There have been many changes on the inside here. Number 77 used to be the spillover Casita I believe. The last time I was here they were working on my old AIR cabin, so I believe now the Artist in Residence were housed over here. Wisely they split the queen size bed into two twins. Instead of having a massively bizarre fold-out bed you just had extra sleeping space in case you had a guest. I checked all the screens, as the last time I stayed here my cat decided it wanted to escape through one. The three screens that were ugly that I took out of the windows because the frames were falling apart are now no longer even available to me. But the ones that were in the windows were in excellent shape. First thing I did when I got in here was open up the window and Thingy jumped right up. 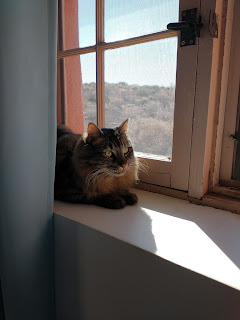 We are here typing on the morning of my second day - well, after my first night - and as I'm looking out just after the sunrise, over my cute little car I noticed a solitary jogger. There are brave people here! She was lean and young looking and obviously worked in the Painted Desert area and was taking advantage of the amazing opportunity she had living here in the park. I will update you all as the day progresses but I just wanted you to know how happy I was to be home again.
Posted by Debra Jones at 5:59 AM No comments: