Outreaching and updating.... and adventures ahead!

I realized a lot of drafts were sitting in my program here, waiting for better photos and I forgot to upload them!!!
So this is just an update on my recent adventures.

I have learned PowerPoint and just finished my third presentation as my outreach for the Artist in Residence obligation...well gratification would be better named.....

In July, I spoke at the Scottsdale Artist League.  August was Tempe Artist Guild and just Wednesday, gave a presentation to a great group of quilters called the Mavericks!   I bring my borrowed projector (GREAT thanks to the amazing Arizona Art Alliance and Mike Brady) and did this one in the daytime!  Still was able to show the drop in the bucket of my over 3000 photos from that month living in the Petrified Forest. When I return, November is Peoria Artist League and January will be the Mesa Art League.   Hopefully I will carry a little less of the original art with me for show and tell as it will be moving into galleries or permanent homes... or donation to the PARK!

Summer is always fighting the cabin fever I get in so many days over 100° weather in the Phoenix area, so I am coming out of my despair and starting to plan my annual car trip to Denver in October.

I have offered to be present for my original month of October (because of the annual jaunt, I nearly declined, but Kip was able to double up artists in May...so I was out of sync) during the last week of the month as I drive back.  So I hope to put on my badge and set up - for a couple of days at least - in the PDI to work on a small secondary project of portraying the visitors!
My first concept was supposed to center around the ravens, and where they would lead.... but they basically HID from me most of the month!  This time I want to interview people stopping in and see if they will let me borrow their visages for a project emphasizing the HUMAN aspect of the park!

I am loading materials and getting them ready for the road as I go up to enjoy the trees turning in Centennial and come back to see another season in my beloved PEFO.

Just throw in a visual aid... 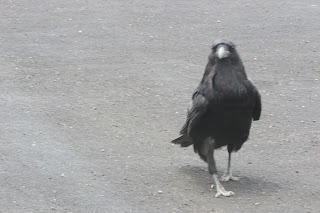