Since October... about a year out.

(NOTE:  The diary began when I got accepted, but decided not to bore you or obsess too much by holding off to 45 days out.  My original, assigned date was October....)

November 2016 is half over which means I am LESS than a year from my start date!
I passed through the park in October on my trip to Denver at the beginning and end of the month.  Frankly, as much as I was hoping for a deadly hot month to help me through the usual cabin fever of the Summertime Phoenix Inferno that lasts 6 months or more of 100 degree days, the beauty of the fall colors of southern Colorado moving down through New Mexico and into the park, was nothing but perfect.  I understand a few flurries of snow but a rather unrelenting wind may be my worst weather problems.  The roads were full of tourist buses and the gift shop was just busy enough I did not get to talk to anyone on the way back home.
Heading out, was a real adventure.
I had contacted Ranger Kip, the AiR coordinator and my cat and I pulled in the visitor center after a slow drive through the whole park (no stops, but plenty of slowing to really appreciate the lay of the land) and he had me bring my guy into one of the meeting rooms and out of the car (again PERFECT weather, but not good for parking with pets) in his portable cage which lays flat and pops up. 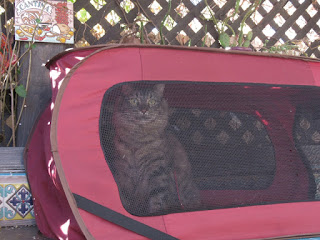 Then I got to go to the laboratory where the zoologists were "skinning' two birds who had mistaken a window for open territory.  By prepping the skins, they can use the information for later study.  From there I was shown. along with the two AIR's for this year, the Museum storage.  I was drooling over a wall of original photographs through out the history of the park, but there were fossils and even some of the artist's works ready for new walls.   In the main laboratory they were using bone fragments to create 3-D printed skeletons for research!  Such great toys!

Which brings us back to this day in November...
Well yesterday.  I had a large envelope waiting for me at the post office when I opened my box.  Inside was the welcome packet! 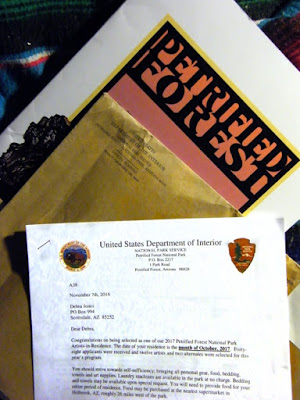 Which included a few forms and thick printed mini-encyclopedia of the park as well as all of the rules for living inside the park.  Which is thrilling.  I expect to have it all well worn long before I arrive.
First thing was punching holes and putting them all into binders.  I really love the little folder it was jammed full into!!
So that will keep me busy for a while.... not quite enough, but no whining!  I can dive into the history, wildlife, archaeology, fossils, rocks and all, any time I start counting the months again.