NOW the cat breathes on me.
I awake to whiskers and worry, as if I were moving so little he was worried I was dead.  As the morning shadows begin, he is obsessed with the changing shapes on the walls.  Lucky us, there are not framed pictures on the wall, but I do fear for the Painted Desert poster above my desk...

So we wake at 5-5:30, depending on how tolerant he is of me.  Literally he has started biting my elbow again.  If he were Lassie, he would be tugging me to the well... just in case someone had fallen in! A good thing about being locked into the park from 7 to 7, is that I don't feel guily dawdling, but somehow, making coffee and arguing with the cat tends to make that hour and a half fly by!  I thought I would drive to the west and get photos of everything I got pix of at sunset, from the other shadow, then escape as the gates open and head into Holbrook to get my supplies. 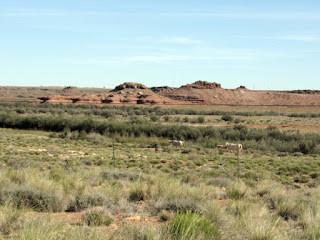 I am getting depressed about the lack of wildlife.  I spotted frolicking pronghorns the day before, with a car behind me, on a narrow road with no way to pull off.... and when I could ,they had rolled over the hill into the plains. I connected with the raven at Puerco Ruin yesterday and met my family of poodles, but barely a shadow of the bird up by the casita.

Heading out of the park, I saw three lovely cream white horses in front of a mesa by a stream.  They thought they knew me as the female and her baby started yelling at me as I took photos.  They apparently got bored and I tried to snap the family as they went up along the river.   NOT PEFO, but this is all about the experience. 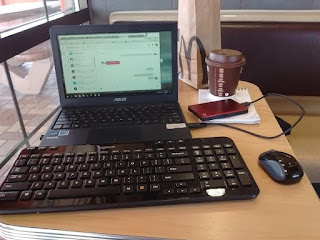 For info, Holbrook Library is not open until noon on Thursday.  I ended up camping in a McDonalds for about an hour and a half updating the blog and getting things up and downloaded. The Safeway is across from the teepees hotel and although I parked by the end that said pharmacy, I forgot to get nose spray... I have been having sinus (not migraine) headaches and taking aspirin daily.  Don't like that.    I seem to be getting nosebleeds from the unrelenting dry. And the emotional ties to the city are still dug in.
I came here to literally heal.
I know the nature most people think of is green, and dense and lush and maybe a little more dangerous (nah, rattlers don't want to deal with us any more than we do them, and scorpions are really happy outdoors this time of year - not too hot, not too cold.) So I am trying to keep this in mind.  The picture frames of beauty that serve as windows are perpetually refreshing.  The silhouette of my kitty in the diagonal made by the window swung open is worth spending hours staring at.  If he doesn't come down to bite me.  So, with shaking hands (IT IS MORE DRY THAN PHOENIX, and I think I am dehydrating!  This could be helping...) I actually managed a very brief nap which did refresh me. 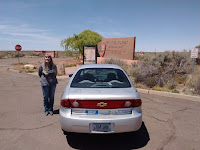 Coming back in, I was setting up at the sign when tourists took my photo!  Missed the "AiR" signage but I look happier! (Footnote from the future... the tree there, or possibly up the road is where I have heard a family of Ravens are making their home..... Project for Friday)
I had a neighbor.
When I pulled in to my space at about noon, there was a nice shiny (I envy great paint jobs) small SUV in my spot.  I was in no mood to chat, but a little later I heard a bit of noise and saw a park person getting on a bike.  "Hello, person on a bike." I called and tried to run outside to chat..forgetting there is patio wall and he was off and on the road by the time I got there.  After the nap, I met Al.  That was his son on the bike.  Al said he was visiting as  VIP (which is actually our acronym for Volunteer in the Park, but when they can arrange a great little individual dwelling for worker's families, this is VERY IMPORTANT...or was we used to call them PP's Privileged Persons).  He had a German accent and was thrilled his son had arranged the room and he took a train from Williams which was late.  Late being a wonderful time to continue his exploration of La Posada and he raved about the wonderful breakfast!  He said his son had told him he was parking in MY spot.... ha... it is a two car park smooth gravel with bricks to frame the space in the ground.  I felt myself widen and lift as we spoke..  I love people.  I like talking to the visitors.  It is obvious this is my project, not stupendous, overwhelming vistas.  Tooooo much info for humans. 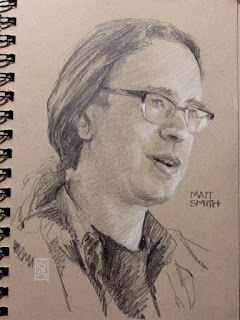 I spend an hour or so looking over my photos and deciding on images and ideas to work on in the PDI or RFM (Painted Desert Inn and Rainbow Forest Museum.  WORTH using the letters and I am remembering them which is comforting.)  After the revelation with Al, I only had the one picture of Matt, enraptured discussing his first-dinosaur, then NOT dinosaur and I wanted to show how much he loves what he does and how important that love is to all of us. I actually ended up working til about 10, then fighting to midnight with the cat.  He now likes jumping on the counter.  Yesterday we emptied the top of the refrigerator.  I almost think the storage closet needs reorganized to accommodate... well... everything that is not tied down.
Posted by Debra Jones at 10:07 AM