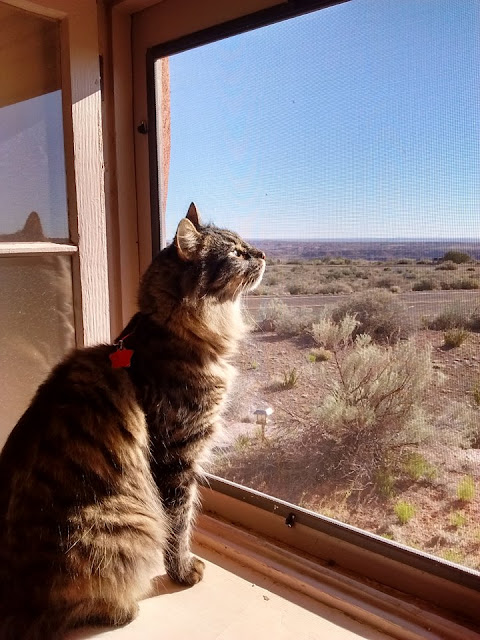 There is something about having a REAL WINDOW SILL for a cat to settle in for the day, that makes this Thing, so much more cat-like.  Although he was still a total pain the first night and was banished for a few hours in the night (his plaintive cries did touch my heart..) he eventually actually curled up next to me and we slept.   Not really what you would call a long night (I did too much straining and stretching packing and the car ride whacked out my hips so I was up and down.  I even spent a while watching what I figure in the morning to be reflections from the OTHER window of the road out east. I thought it must be campers but they were  spookily nearby.  Ha.  I think this may explain the haunting across the road... reflections.

Before the sun actually came up (maybe about 5) a yellow orange glow fills the cloudless sky in the east.  Startling colors.  Not soft gentle pinks one is used to... but not enough to rouse me.  THAT happened a little over an hour later when the sun BLAZED in on my eyelids.  Once up and over the sill of the window, it was a perfect alarm.  I adjusted the center panel in the blinds to block the earliest rays and found myself brewing a pot of Mr. Coffee to load into my travel mug and see if I could play alone on the Painted Desert Inn patio and start loading the blog. 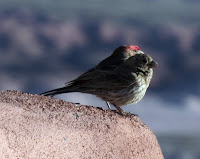 In the morning I realized the wifi was a phantom to chase, not a real thing available to me near home.  The PDI has a transmitter that only temps, not rewards wifi seakers.  But the walk across the Park Road was worth it.  Long before the the tourists and rangers showed, it was a chilly but not cold start of a day.  I found some amorous birds enjoying the shortening shadows with me as I slowed down again to sip my coffee and enjoy the view.  Every morning and evening, it is going to be different.  I am sure the  possibilities will overwhelm me.  I am going to try to just WATCH. 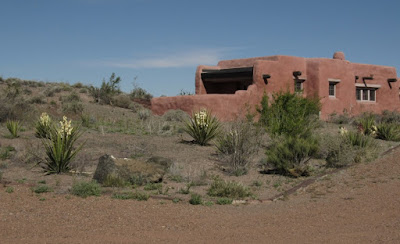 The actual environs around my place are pretty nifty.
Aside from the greeting I got from a The landscape is full of blooming yucca. I  remember Mom valuing the pods for crafts etc.

I also thought there was a scattering of actual litter.  White flowers individually stood boldly against the dusty, scruffy landscape. 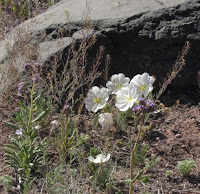 I wandered on the hill above the casita and got lots of little things... 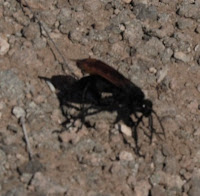 There were little jewels of rocks and shrubs.  I picked up two stray bits of petrified rock to admire in the cottage during my stay.
I saw a huge footprint of a wild beast.. fearing Coyotes or worse, I realize in a dog friendly park, Just good old Rover leaves his traces...
I met a Tarantula Wasp, and the little lizard (who I hope is not the one later in this tale..) 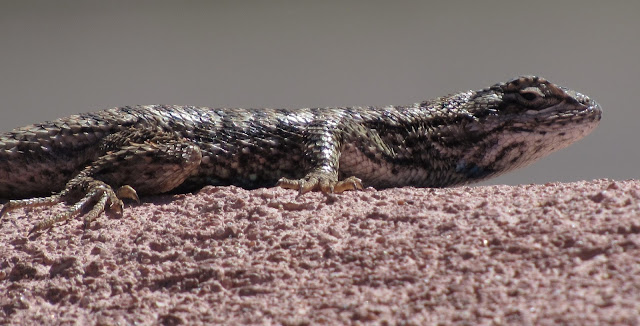 Late morning I went to the visitor center and scouted the wifi and laundry and loaded yesterday's blog. Kip was going to be at PVI all afternoon and I said I would bring the spare car magnet for visitors... Then I went off to see the museum in the ACTUAL Petrified part of the forest.

I had chatted with a cute woman from England who said her whole reason for being here was a discovery of Route 66.

I am still working on  my theme of visitors, but it was initially following the ravens... all of whom have abandoned me so far. Packing up pencils as if I would do anything besides photograph, I filled up the card with the same amazing views as a year ago....then suddenly near Puerco Ruin, they found me.

My first painting will definitely be him, as he perched atop the silver vent on the restrooms, the 1/4 moon faint behind him in the bright day.... 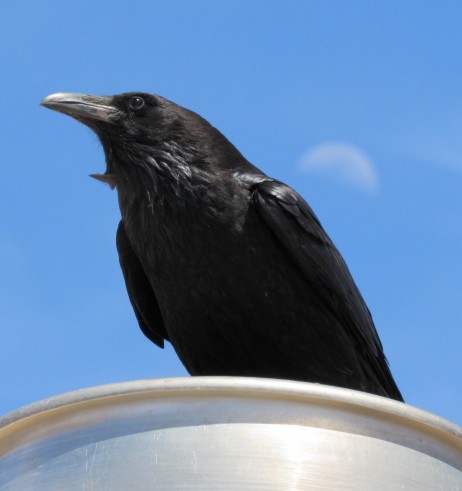 I met four lovely poodles on their way home from a club meeting in St. Louis.  They may be the second in my series.

A LONG eye-burning windswept trip through the park, found me exhausted but I managed to roll into the parking lot before the PDI shut and I walked the sign over to Kip.  I met my fellow artist, attempting to capture the vista across the street!  I am too daunted for that!

When I came back, the cat was looking intently at something.... 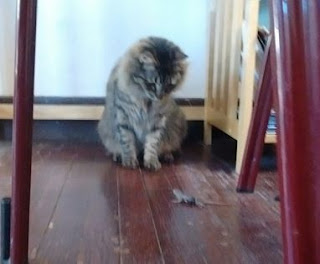 It was a mortally wounded lizard who did not seem too excited to leave or to stay.
After brushing him out the side door, I felt pretty sad. 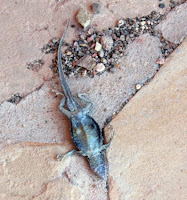 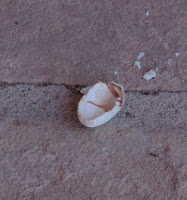 I had found a tiny broken egg this morning on the patio from the nest directly above my door and a petrified smaller lizard body.

It is all natural, but it all made me sad.