Last night, sitting with my computer on my lap, updating posts jumped on the PD wifi I was so excited - did so much!
But when I looked through my photos... I was working, not snapping.  No photos today of the Petrified Forest Museum, or gift shop.  I felt very much at home down south.  Aside from the hour round trip, and high gas prices in here, the drive would be the main order of business every day! 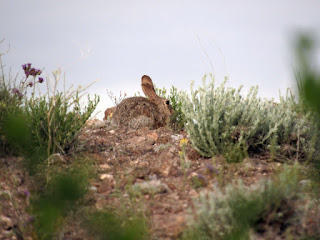 NOW he is my hairdresser!  Last night I took a nice bath (the heater only warms exactly half of that seductively big tub...waaa) and I guess the cat belives that clawing my hair will get me up faster.  Grrrrr.  Again, as dawn turns the sky red, he is letting me know it is time to rise and shine.  Like Tom, in Glass Menagerie, I am not thrilled.  But it was fine.
I did see a jack, but the photo was horrible and he left.... so here is one of our morning bunnies instead:

Officially the sun rose at 5:30 and my great plans of getting to the RFM early and setting up for 8 when they opened WOULD have been OK, but Steve, the guy on duty, got their plenty early and left the doors open.  So in came the tourists.  And if you know me, I don't shut up...
First exciting meet was the Lees...two Korean women, one of whom was an artist.  I LOVE MEETING PEOPLE!  I had just set up and they were great to talk to.  I am going to have to have that clip board tied around my neck! I keep forgetting to take the pictures!
I next met a wonderful woman from Utah that took my PET card and seriously wanted my contact info... (fingers crossed).

Challenging myself is one thing, and I sort of proved I could DO art (I have horrible blank canvas terrors if I am not backed up with pieces getting ready or finished on the easel for other people.  I have NO idea which of the millions of ideas in my head will capture the fancy of others and keep a roof over my head.)
Were the cholla not so mind numbing, I had a great day.  Painting is so automatic and Steve was a good guy who was really lonesome having lost his 3 pound chihuahua only 6 months ago.  He had great tales to tell about his brother and the agate magnate!  How ingenuity and seeing the bigger picture parlayed him into definitely one of the richest men in Holbrook if not THE.  I loved the story of how he watched a guy gutting some old buildings and after the workers left found pounds of old Wells Fargo stored ledgers and checks!  After a few donations for history, old cancelled checks were going for at least $20 a shot and he had a DUMPSTER full.  I would loved to have a few ledger pages for toned backgrounds.
One mans trash...(again, no photo, but HE will be a colorful character in the series...) 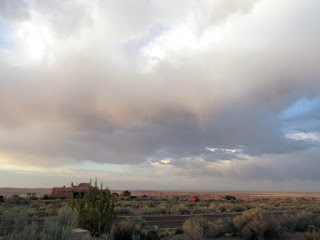 The wind picked up good at about noon. I really wanted everything in the car, so I didn't risk it blowing away... but I totally forgot about the wifi.... what wifi!  It was on and it worked.  Stayed after loading the car, as I didn't want artwork sailing down the road, to catch up... not much I really needed to know.
Came home and made lunch from the bran flakes left by a previous AiR (thank you)  and my milk from the store and set to work trying to get  finished of this painting. Listened to NPR, until my eyes got blurry, then drove over with camera about 5 to see the cloud shadows.  MIGHT HAVE TO MAKE A PLEDGE NO MORE PD PIX.  I am daunted and it is not helping.

But I took the computer and drove over to sit in the parking lot for a little while to post the sunset in the blog.
Came home and, having taken out the contact lens and going sans correction, worked some more on it.  Pretty much grass and grass and grass...much like fur I guess
DID see a really fleeting rainbow!  Pale but spectacular. 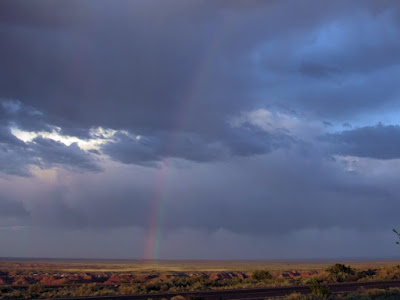 With tomorrow's wake up call, I tried an early to bed.  ha.
I learned that the cat is obsessed with the moon or changes in the clouds.  He has tried to climb into the window overhead a few times, so I closed the curtains.  Now he is chasing moths.
BUT before we turned the lights out, I will say I have something that can be put away for a while with some satisfaction: 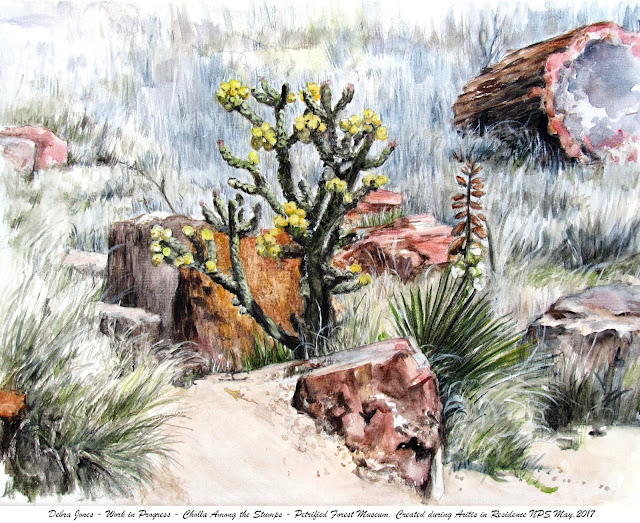