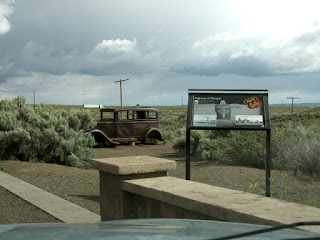 Because I am trying had NOT to load up my photos every day with beautiful scenery I will not be painting, I had a run down to Route 66 which Kip had mentioned was a place to look down and see JUNK, but we all need to realize it is HISTORY. (.....Forget the fact I was around when it was still a road.)  History does not have to be ancient.  We make it every day and when others are interested, memorabilia becomes historical.

Geology, Paleontology, Archaeology, Anthropology, Biology and HISTORY!  This literally has everything!


I did stay in bed until 8.   No, the cat is still trying to get me up before sunrise, but I am sticking him in the bathroom after he begins digging me out of the blankets.   I feed him.  If he gets wacko, he chills.

It was a day of weather!  We actually got enough rain to call it rain.  The red walls of the patio were red and the ground was muddy.  I had a plan to wait until everyone was working and get in to see how the rec. room and the single washer and dryer worked.  Rumor had it that people left laundry supplies.  I forgot that in Holbrook too.  Although I had a bunch of tops and blue jeans, I was not sure how large the machine was so decided the sheets and I could hack it until after the trip into town on Friday.
LUCKILY one load was left in a bottle of Tide natural and the washer could easily handled my sheets.  So now I know it is a big loader.
The rain had completely stopped by the time I got in and I posted the blog from the cafe while it washed.  It is very slow but it was raining intermittently as I arrived.  The patio was not healthy for electronic devices. The power had gone out a couple of times... once while the clothes were in the dryer.  I met a couple of paleontologists who were moving casts with bones and they showed me the breaker boxes...which were unnecessary.  Came on all by itself and apparently was park-wide, as I had to reset the clock in the casita.

I fruitlessly went seeking someone to see if I could be a vendor in the park stores but I pretty much realize, like our own zoo, local artists who are not into mass production are out of the loop.  So I guess the trip into Santa Fe us still a venture to plan.  Much harder to market and get info on galleries from a wifi from nowhere. But it is nice to check in with civilization in the AM.

I loaded my piece of Jorge in the car in case there was a break in the weather and possibility of painting on it.  The PDI was pretty action packed.  There was a young man and his mother again selling their rugs and wares but they were excited to let me paint them.  I may use them as the demo in Holbrook.

I ALSO RAN INTO KIP!  We had a long and productive discussion about what I am doing and what is expected of me.  I have been fighting the guilt to be making things, which is sort of counter-productive to feeling artistic.  He basically gave me permission to paint where I want, and just text it to him, in case there are issues.  He gave me the info and game plan for Holbrook and encouraged me to bring my wildlife and work on some rocks to show on the weekend as it is Mother's Day and they are having a migratory bird seminar.  I do wish I had more visiting fine feathered friends, but the sparrows and ravens are lovely subjects too. 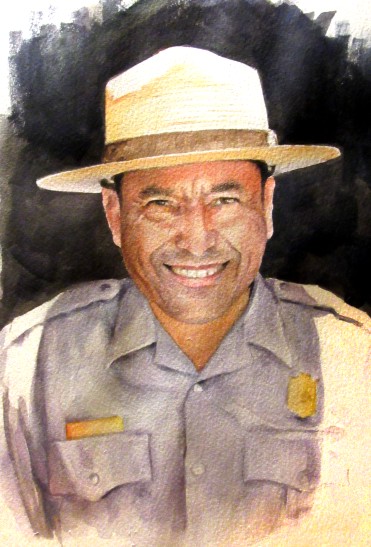 NOW I have things to be involved in.

I even seemed a bit energetic.  Although the light is pretty wacko, I did work late on Jorge.  In the morning light I see a bit more work but it is good for the unveiling.

This is how I feel about the journey in the park.

The smile on the ranger in the tiny office as you come through the gate.  This is a place where people don't just work, they love what they do.  They have a passion for the actual locale.  Some were born inhaling the dust of the Painted Desert, others migrated from far and wide to have the experience of just being here.  Jorge is always there with a beaming grin, crisp uniform and so happy to see me and ask what I am doing!

This is such a privilege.