I got most of the cleaning and washing out of the way yesterday in the storm.
It was a kind of a sad day. I thought I'd have to leave today. But when I asked I was allowed to head off early in the morning tomorrow so I would have the sun at my back all the way down. If I leave when I say I will. I should pretty well make it way before noon.
So today is a "waste not want not" day!
I actually ran into the archaeologist, a gentleman that I had somehow managed not to bump into the whole trip. He was there with three other of the research types taking a crew of newbies around the park. I asked him where the best place would be to find pot shards on the ground. He told me I had been there. It was among the petroglyphs that I found. I was given permission to wander among them..... 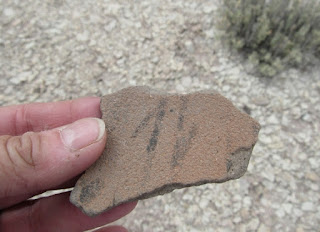 It was amateur archaeologist died and gone to heaven!


I have to do all my reading again, but I believe I have culture spanning modern to archaic. I have all colors all shapes all sizes. And each one evoked an audible gasp! 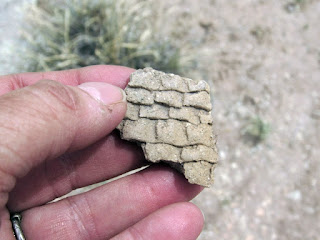 The day was so perfect for it! Overcast threatening rain And cool. I was able to hike
along, oblivious to time, and spent about two and a half hours looking down, all by myself.

Exciting thing number one about not stealing the rocks: Taking pictures is not heavy at all! 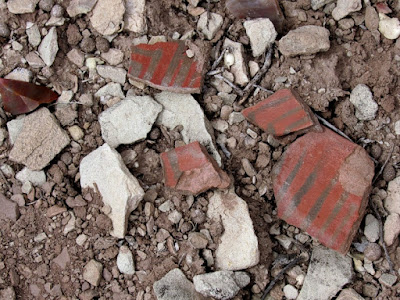 I must say I was surprised to find I had taken less than 200 shots! 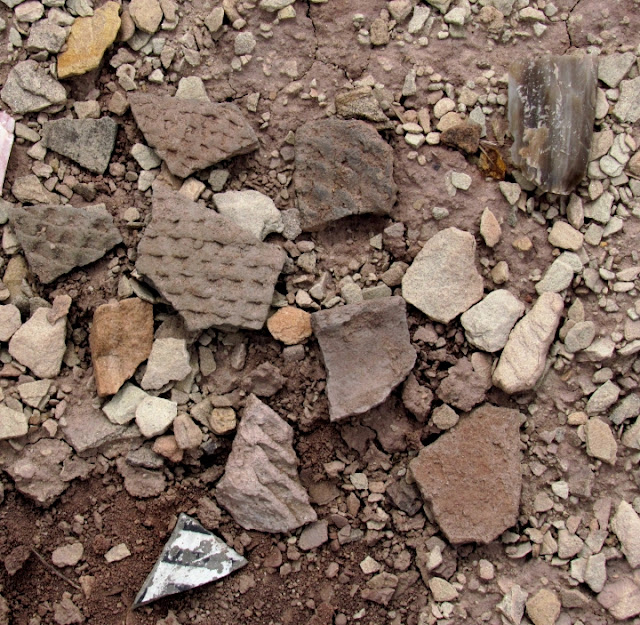 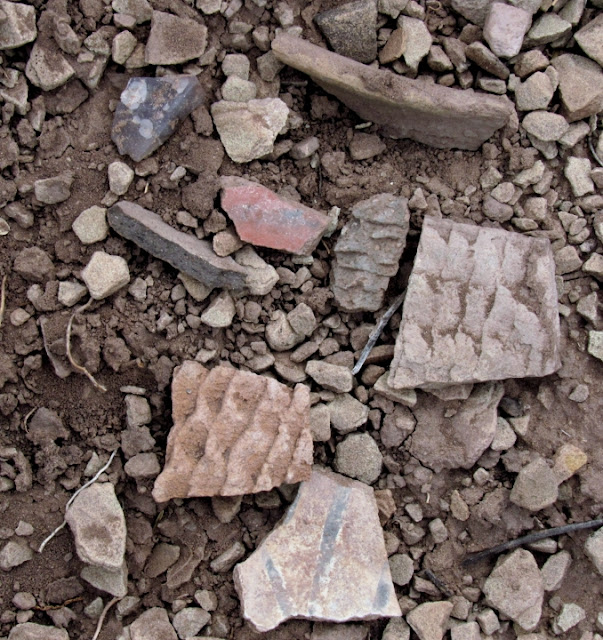 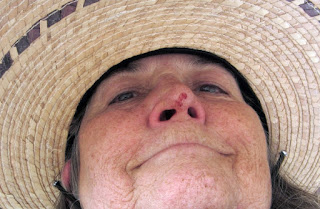 Not so exciting thing number one about not stealing the rocks:  Bending over in the dry weather with a few too many aspirin in your bloodstream can cause a nosebleed!

I had to pinch my nose and kick things with my feet.  Photo was to see what needed cleaning before going into public.
Undaunted I continued, although there is a small pile of potsherds with a little bit of bloody drips next to it... I ventured on. 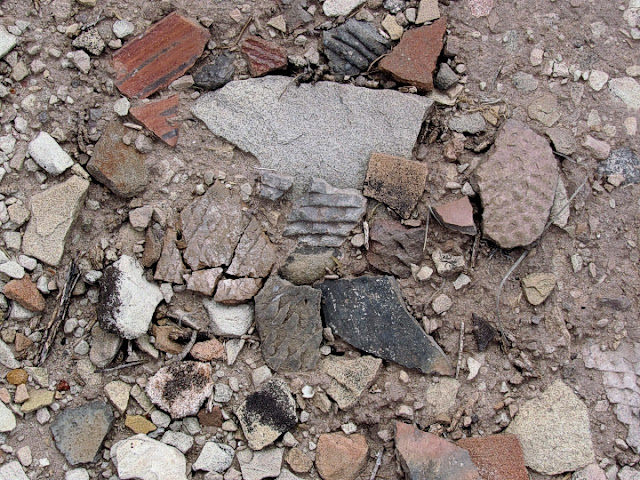 The above cache was so amazingly diverse, ridiculously beautiful and laid out so as to produce heart-attacks to novices, I almost wondered if the archaeologists sort of mess with the new kids and do this now and then to blow their minds.  It certainly worked for me. THIS IS EXACTLY how I found them!  I started watching for beautiful, small colorful petrified wood flakes.  Not naturally occurring, and when I saw a LOT, almost without fail, there was pottery.
MY THEORY is that the manufacturing spots of points and such near petroglyphs were traditional and folks either used the same spot as dumps for the broken pots or the guys broke their dishwear at an unusually rapid rate!


I had originally thought of taking a walk from the teepees to Blue Mesa, but the sun has come out so it is warming up and the cat and I have had a very nice little snooze. His reward for being such a good guy was a little jaunt on the patio to scare off the birds who are nesting above us. I got to watch a cat who has no clue what outside is freaked out that the wind is blowing his fur.
It's midday, I have to go gas up the car because the plan is to go via the South Route tomorrow morning. That will let me have one long run through the park and out past some of those rocks that I coveted outside the park.
I seem to have bread, pickle relish and a can of tuna fish to pretty much show for all that's left of my groceries. Perfect timing and less to haul home.
I'm going to post this now so I get something up today and tomorrow I will post from home 😖.
Things will be updated when I have a little more free Wi-Fi, but I have tried my best to keep you informed as I go.
Posted by Debra Jones at 5:16 PM