I am thinking of the long weekend.  I had so much fun with people on Wednesday that I think rock art is a great demo idea.  Maybe a few decals, if I have enough painted to get some laser prints made.  It is a pretty fun show and tell.  The people are intrigued and learn a craft project.
So, I have decided to go south.  I took my usual hour to drive to the south entry and am going to wander the road toward Holbrook, looking for good sandstone, local stuff, that I can work on.
(YOU HAVE NO IDEA how beautiful the litter of sandstones on the ground HERE are!  I have never had to resist so hard!)
****
Later.  I had a little jaunt up 180, and got to see the white horses again but unimpressed by the rock options.
Like New Mexico, the stones are very delicate (at least the easily found ones right off the road.)
The project has become trying to figure how to seal them so they don't crumble and still look like the dry colorful rocks of the area.
One would not believe it, but I had a very long day and as it is 3:30, I am pretty sure the rest of it will be full or projects.  Did not feel great today.  I may try to just walk, if the wind does not blow me away,  I don't LOOK like I am obsessing, but I have so many projects in my head (and trying not to think of the fact that this is my last Thursday in the park.


I do not like that...
But in years gone by, artists only got two weeks, so I will dive in and make this last 7 days look like the  BEST part of the project!
THEN cry...

****
Much later, I found myself, as is my habit, working at night, not in the demo spaces. The initial rock plan, to hold the soft pieces together with "transparent" acrylic gesso had to be completely washed off. New idea later.
But I was energetic so I finished my ram.... 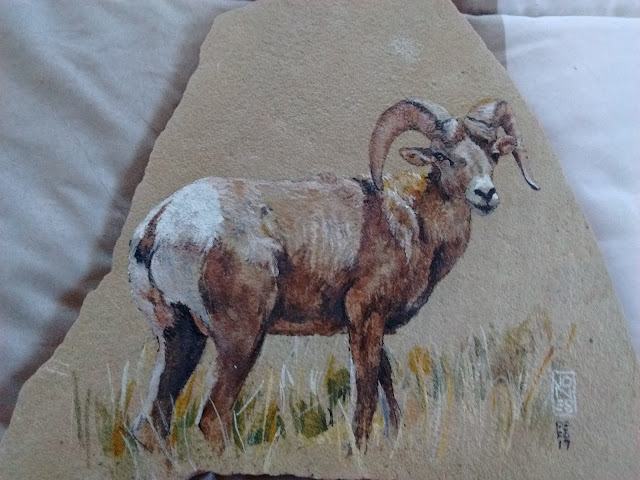 I hate a blog without pictures....
Posted by Debra Jones at 4:50 AM