I refuse to talk about how early I got up.
Last night was a novel and hysterical experience!  I had neighbors who broke the cardinal rule of WEAR YOUR KEYS around your neck. Dark sky photogs who wanted to photograph our partly cloudy blackness.  I can only say, that as the daughter of a boy scout, some of my being prepared was not used as intended....  Once inside and all put back together as it should be, I gave them the proper warnings and actually got to bed early... drapes pulled more than usual.

So today I braved the early park.
It was only 7, and although gates were closed on one side, they were open and I headed to Puerco to try to photograph the swifts.  I curse loudly here, as this cannot be done.  I will say I surrender and move on. 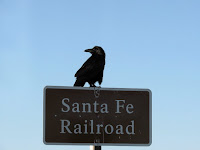 My boy the raven was there to say hi as I came into view of my destination. 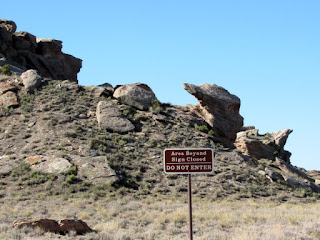 I retraced the steps that Hallie has pointed me on yesterday and, all by myself, I walked the cliffs and petroglyphs (BE SURE TO ASK IF YOU TRY IT) going exactly to the spot I was told to not go beyond.

I did a lot more looking down than usual.  This hoof mark repeatedly kicked up something to the left.  I wondered if it was moving slowly and dragging one foot, as in an injury, or running quickly, although it was only on one side... I will see if I can find a biologist! 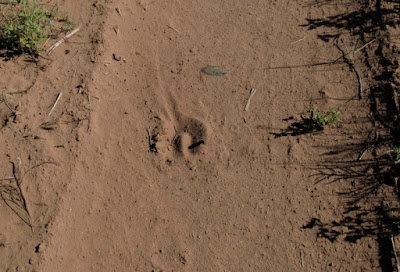 Also, there was a very large print that definitely had pads and claws.  Did not photograph well.  Did not look like they were at the same time either... ah the mysteries and stories in the mud! (In hindsight, I have realized that lots of my large mystery print PROBABLY are cattle... duh)


I want to show this.  My favorite petroglyph panel.  What is wonderful is that the very deep carving on the left is completely black.  It has grown a full, new desert varnish in the time it took to make the others on the right.  That circle is also split in half with pecks that indicate to me either half moon, or day and night split.  It fascinates me. 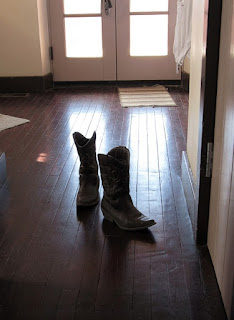 So I came home rather energetic!

looking down the hall, my boots beckoned.

About my boots.  I am nothing remotely like a cowboy, but I hang around with them a lot, so I needed boots.  I don't remember if my boyfriend found these or I dug them up, but they are my "welly" boots.  In England the boots are made for mucking about.  Good boots (and I could never afford GOOD ones) are pretty beautiful here and when facing muck, rapidly cease to be lovely.... so these are 100% Naugahyde!  A nearly extinct beast, formerly widely used for leather furnishings in the 70's and 80's.  I have no fear of ruining them and, although there are more poisonous snakes in the Phoenix area than here, if I will be wandering among nasty shrubs, I want a tall shoe.... so the boots...


I am going to either do some more birds (insert cursing) or perhaps a few botanical pieces...but I just got the urge to look down again, so I set off up my hillside behind the casita.

The seed was planted yesterday about tiny flowers. As I looked they seemed tinier and tinier.  These are my two tiniest candidates with boot toe for scale: 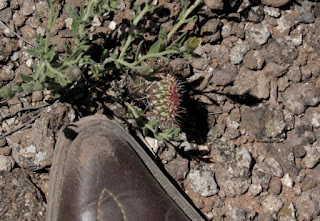 Then I did see a tiny cactus!

I had a piece of agate that I had found up the hill and went hunting for it again.  It is obviously not naturally occurring as this whole area was modeled and remodeled since the 20's but the litter on the hill is so wonderful.

As a former Archaeology Society member, my heart stopped seeing the white and black in my gaze!!!!  I regret to confirm it is NOT pottery.  A natural patina of some sort on a very conglomerate rock, but I can dream...

However this was an obvious piece to ponder. I did turn it over and it plainly bone, but I didn't pick it up.  The little round edges seem to be mineral.  I wonder if it is bone or stone.  Just wondering is enough for right now.


Then I came across a failed art project!  A highly polished piece of a beautiful cabochon of agate.  Sorry it did not make the silver setting it was bound for. 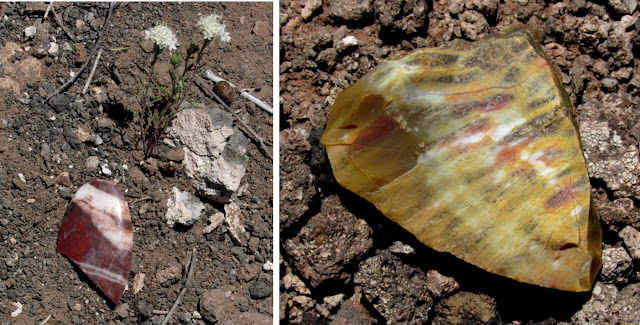 And then this eye-popping yellow agate!  Never have I seen anything like the colors in this!


I gathered a few strays up and will continue to photograph and enjoy before I toss them back for the next treasure hunter climbing up behind the casita.


(AND... now that I have come to the PDVC I hear the long awaited ICE CREAM at the Painted Desert Inn is doing sampling today!! Dang! I wish their wifi worked!!)
Posted by Debra Jones at 4:01 PM