Out of the Park and in to Holbrook! Demo Day


I had such plans!
Last night I set out to prep the paper and sketch out my piece for the demo.
I inventoried and priced all of my rocks.  Who knew my biggest moral issue here would be the amazing amount of perfect flakes of flagstone/sandstone right out my door!!! I brought about 10 blank pieces and feel GUILTY!  I swear, they are mine and getting them from patio projects and quarry stores in Denver, make for such boring stories, that I might go wandering roadsides on my way home from the Holbrook area. Not much of a visual day, again. I do find it is harder to document a day of work than a day of just BEING here!

I figured a day in town was due.  Made a couple of lists (and lost and found them  many times) and figured Safeway and an hour of McD's so meeting up at 4 at the depot would mean leaving around 1:30 to have two hours or so to play.

I took the first business 40 in to town.  I realized I had not left the park for 8 days! Having become a can and jar pro, I also seem to be eating three meals a day and not feeling hungry.  I have found I may be experiencing actual dehydration, as the wind will suck the moisture out of every cell.  Not at all a bad price to pay.
I found a dollar store in the way in!  I needed TP and laundry soap in small amounts so it was perfect.  I even got my mac and cheese, canned tuna and could leave three bags in the car for the demo.  Never made it to Safeway, headed right to McDonalds, where I was able to post the blog from yesterday and download a ton of podcasts before they started looking oddly at me. 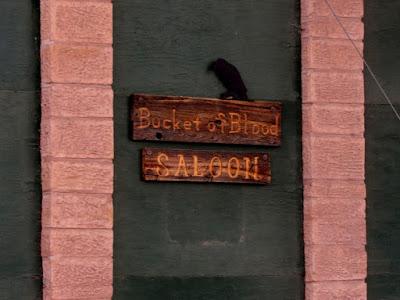 I gassed up and drove to the depot.

I found the part of town that had been referred to as the "old Skid row".....hmmm!  This door was the perfect example of the neighborhood.


Old buildings with lots of rocks and an even more interesting building behind the depot.  I did a bit of snapping and got a feeling for what is pretty cool about Holbrook... and how a lot of it is not even doing business anymore. 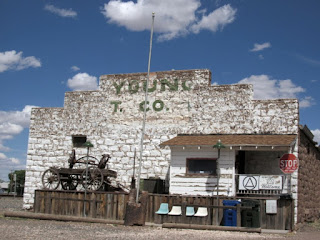 The depot was a bit dusty and I wore my only snazzy outfit...which was black pants (ugh) and three nice display tables. 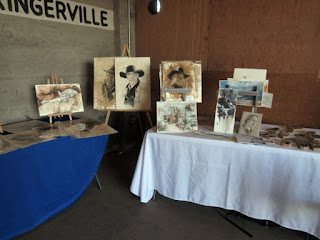 As I was waiting for my hoards of visitors,  I realized all the care I had spent on brewing a bunch of grounds to demo my coffee stain, had eclipsed the simple packing of CHARCOAL PENCILS!! I forgot the medium for the demo drawing. 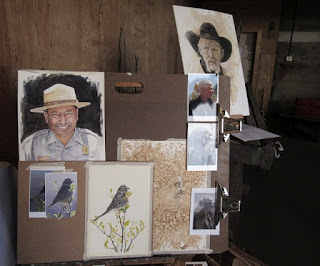 But I had a lot of fun walking people through the display as they recognized my Pony Express guys by different names than I had them identified by! (!!!)

Two hours and a lot of nice people, I loaded up as fast as possible, as it was my first night after the gates closed..... Spooky!

It was past twilight as I went to negotiate (AND FIND THE POST WHERE I ENTER IT) the gate code.  I am so cool.  I have a small flashlight on my rope of keys, so I entered it, and it didn't turn green, but I drove up and sat at the gate......nothing....
When I went back to try again, I saw a truck pushing buttons and the gate opened.  I waited for him to go past and pulled beside him.  He saw my AiR car magnet and figured it was normal state for a visiting artiste' . As I drove up to the gate I had a key for, the side I was facing was, indeed shut, but the outbound side was open.  I am such a wus.  I immediately began wondering what escaped criminals were doing just what I did!!! (next day I had it explained that the "sweep" every evening started at 7:30, and they began by closing them out, and chasing them down to the main entry.

IT WAS DARK when I got home.  My litte light was great and I got groceries and computer and a couple of bags of art supplies in the house with the flashlight in my mouth!!

NOT keen on after-hours travel.

But I felt so bad, I located the pencils (in the DESK DRAWER!!) and worked on the un-started demo! 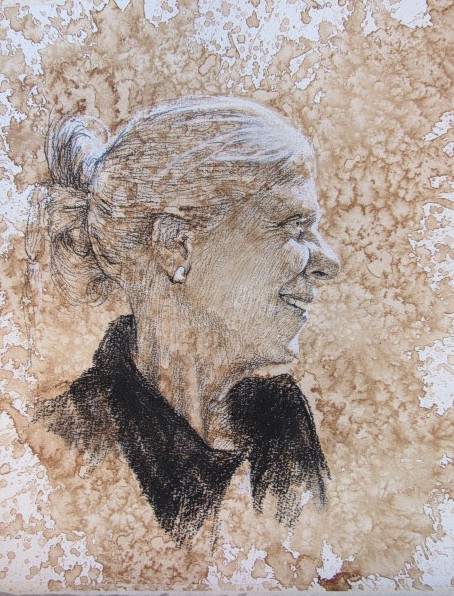